Why it’s good to talk

With remote working on the rise, how do we ensure we’re communicating effectively with others, through good old-fashioned conversation? Alison Coleman reports

Digital technology has transformed the way that we communicate at the expense of face-to-face communication. As psychologist Susan Pinker says in her book, The Village Effect, “In a short evolutionary time, we have changed from group-living primates skilled at reading each other’s every gesture and intention, to a solitary species, each one of us preoccupied with our own screen.”

Nowhere is this more evident than in the modern workplace, where employees – particularly the growing numbers of remote and mobile workers – are increasingly reliant on email, texts and instant messaging to interact with their colleagues. And with a Cancer Research UK study(1) revealing that Millennials (who will represent 75% of the workforce by 2030(2)) are shunning face-to-face conversation in favor of chatting online, it’s a trend that looks set to continue.

While the sheer speed of digital connections appears to beat the time-consuming process of physical interaction, the importance of face-to-face conversation in the workplace shouldn’t be underestimated. Research shows that dispensing with a regular chat with people – whether they’re colleagues or other people nearby – can have a negative impact, not just on our health and happiness, but also on our productivity.

The boost to our quality of life that comes from face-to-face time with others is not replicated during time spent interacting with others online(3). A study carried out by Oregon Health & Science University(4) sounded a more worrying note by revealing that having limited face-to-face social contact nearly doubles someone’s risk of having depression.

And research carried out by Hewlett Packard(5) has shown that moments of conversation between co-workers can increase performance by 20%, while another study uncovered that 72% of employees who have a best friend at work are more satisfied with their job.

Social connection should be considered as much a basic human requirement as food and sleep, as being deprived of it can impact mood, mindset and performance in a negative way. But if you work remotely, who’s going to notice?

“Early warning signs of remote working having a negative impact are everyday social things being missed, for example forgetting to wish a colleague happy birthday or finding excuses to not attend in-person meetings,” says behavioral expert Richard Daniel Curtis. “After that, you may notice that their manager cannot tell where they are in a project or lose track of their workflow.”

Organizations need to recognize the benefits of face-to-face communication and encourage more conversation between colleagues. However, when so many now work remotely, how can conversations – where body language and facial expressions indicating different thoughts and feelings are an integral part – be facilitated?

Here, the humble telephone has its advantages over digital communication channels because it does allow elements of intonation into the conversation. Voice tone gives dimension and emotion to words and offers clues as to how someone might be feeling about the discussion. Texting and emails are just written words open to interpretation by the receiver, without the benefit of voice tone or body language.

With visual communication channels such as Skype and Google Hangouts, body language, including eye contact and hand gestures, feature more prominently in the conversation and offer the next best thing to a face-to-face discussion. 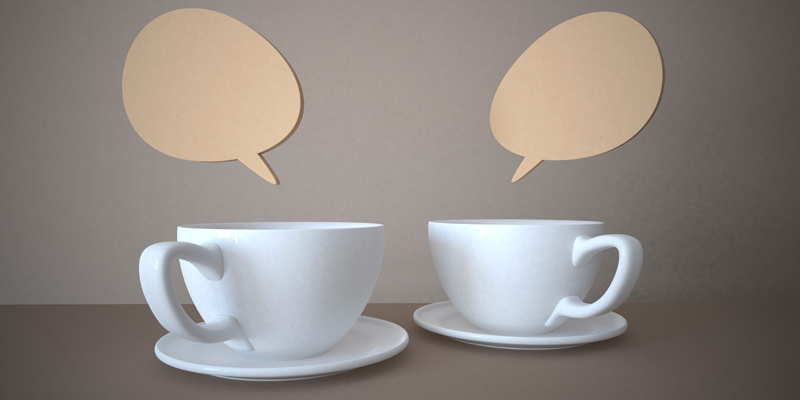 Moments of conversation between co-workers can increase performance by 20%, say experts

Actually seeing someone’s face can make the difference between a successful interaction and one that doesn’t quite hit the mark. Research carried out by Mahdi Roghanizad and Vanessa K. Bohns(6) shows that a face-to-face request is 34 times more successful than an email. The good news is that “face-to-face” in this day and age can just as easily be via Skype or other video-conferencing tools. In contrast with email, or even talking on the phone, video allows you to see someone’s body language – giving you valuable visual clues that may help contextualize the conversation.

According to Stuart Duff, head of leadership development at business psychology firm Pearn Kandola, when it comes to using video conferencing, it’s up to leaders to set the tone. Research carried out by the company revealed that leaders who are seen to be most successful regularly used video conferencing to speak with their teams and built “social time” into meetings.

“This enabled their teams to catch up and enjoy each other’s company before getting down to the business agenda,” says Duff. “The least effective leaders over-relied on email or teleconference calls because they believed that video conferencing was too difficult to use on a regular basis. The challenge really lies in the attitudes and mindset of leaders.”

The type of conversation that people have is also important. While employers in the past often frowned upon office small talk, organizational psychologist Professor Sir Cary Cooper believes it is fundamental to team-building and performance.

“We all need our social needs met,” he says. “Small talk can be about a football game, a film we saw, our kids, domestic problems, everything under the moon. Small talk is about building relationships, and the more we do that, the more we know them, the better we’re going to bond and the more productive we will be.”

This is supported by studies showing that when casual conversations were not possible, people were actually less productive and less able to carry out their jobs(7).

Another factor in the decline of this form of interaction may stem from the fact that so many workforces are multicultural, where email communication between colleagues from different cultural backgrounds becomes an alternative to potentially awkward face-to-face conversation. But emails and their contents are notoriously open to misinterpretation.

It is scarily easy to misjudge the tone or urgency in messages. Even the formality of the greeting, whether you use “Hello,” “Hey” or nothing at all to address someone, can be interpreted differently according to the recipient. Add to this the potential for language barriers or cultural differences and the message can become even less clear.

“Some cultures have entirely different ways of initiating contact or building trust, so it’s essential to invest time in trying to understand this,” says Paul Smith, occupational psychologist and founder of WiseAmigo. “Without realizing it, we’re trying to gather as much information as we can to tailor our approach to communicating and influencing others. We can build our communication muscles and get better at interacting and building relationships by doing it frequently.”

Alison Coleman is a regular contributor to the UK’s Guardian Small Business Network, and also writes for Director magazine, the publication for members of the UK Institute of Directors